What is a Kinder Goat?

There was no Kinder Goat until Breeders in Washington State came together to form the Kinder Goat Breeders Association. This was done after the breeding of a Pygmy and Nubian was done by Pat and Art Showalter in Snohomish, Washington. They and others saw potential in the results of this breeding so they came together to form the association along with rules and regulations, a breed standard and a registry. Officers were elected to over see the workings of the association. The name Kinder was decided on by the people who set up the association.

The animals used in first generation Kinder breeding must be registered with ADGA, NPGA, AGS or the Canadian Goat Society. Any American Nubian used in this first breeding must show 100% on that registration paper. Nothing but 50/50% breeding is accepted,

There is a breed standard and score card that is used for Kinder goats. This is the guide that all breeders use and also what the judges use in the show ring.

Abnormalities and all sort of disease like Johne's, CAE and CL can quickly deplete the Kinder gene pool. Selling animals with any of the above will decrease the gene pool all across the country. Great care needs to be taken when selling animals and when buying stock from others.

This is true of all breeds but the Kinder is much more vulnerable because their gene pool is so small compared to the other breeds.

We need to be vigilant in our breeding practices so we sell only animals with good genetics, those that are healthy in every way and those that conform to the Kinder Breed Standard.
Posted by Sue at 7:28 AM No comments: 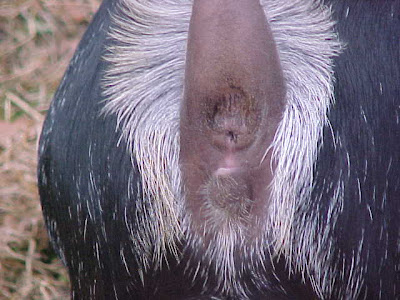 Here is a picture of one that you must cull. Pay attention to all parts of your goats because this animal should never be bred nor should it be sold for breeding.
Posted by Sue at 3:56 PM 1 comment: