A Kinder Goat is one that is bred according to the Kinder Score Card and the Kinder Breed Standard. As Kinder breeders we are breeding one type of goat and that is according to our standards. We do not have two or more types of goats but only one. The Kinder is a dual purpose animal that will milk and also provide a good meat carcass. The ideal Kinder doe is to be 26 inches at the withers and the bucks 28 inches. Those animals with longer more dairy type bodies and legs are not truly Kinder goats. There are many dairy animals for people to choose from, we do not need to try to make our Kinder one of those. If we are to continue to breed a dual purpose animal then we must breed according to our standards. 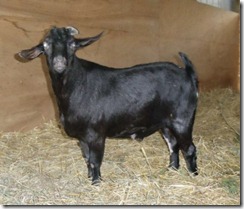 This is a good example of a Kinder buck.

I suppose I should say that this is the breeders preference but if you are selling Kinder stock then you might want to consider the buyers thoughts.

For my husband and myself this is very important because in general dam raised kids are not nearly as gentle are easy to handle as those raised on a bottle. We are in our 70’s and 80’s so animals that are easy to handle is quite important. We have owned both so we know first hand just how these animals act as kids and into adulthood. Those Kinder raised by their dams are never as gentle and trusting as those that are bottle raised. We have one older doe in our barn right now that was dam raised and to this day she is not nearly as easy to handle as the other older doe that was raised on a bottle. We have two doelings in our barn right now with one being raised by her dam and one raised on the bottle. The young doe that was dam raised is quite a challenge when trimming hooves, worming and etc..

I often hear breeders say that leaving kids on the dams is the natural and best way. It may be the natural way but it is not always the best way. When raising Kinder kids give some thought to the buyers that you plan to sell these animals too. I would almost always give more money for a bottle raised kid than one that was raised on their dam.

Here is a little hint that has worked for us: When wanting the dams to raise their kids then only leave those kids with their moms for the first week to ten days then  move the kids to a separate area. Twice a day bring the does to the kid area and turn them in for the kids to nurse. Just as soon as they have finished nursing open the gate and doe will be very happy to return to the barn leaving her kids in their kid quarters. Doing it in this way the kids will become yours ( much more friendly)and they will also be able to be raised by their dams. It has always worked for us.

If you have not sent in your ballot voting for Officers for 2012 would you please do that right away.