Thank you, Sue Huston, for this wonderful article on milk testing:

How much milk is that Kinder doe giving? Just because she feed three kids are her udder looks full are maybe you are milking three does and the gallon bucket is about full with this specific doe probably giving half of this. Is this your answer to the quantity of milk this doe is milking?  If so then you really don’t have any idea to the milking ability of this doe.

You don’t think that the amount of milk being given by a certain doe is important?  Well it may not seem important as long as you are getting enough milk for the family are the kids seem to be growing well. If you are selling Kinder stock then the real milking ability in you herd is very important and you need facts to prove each and every does milking capability. You might have someone looking for does to milk in a diary situation. You would be more likely to make a sale if you had the figures on all your does giving not only the quantity of milk but also the amount of butterfat and protein. Kinder does in general have higher butterfat content than many of the other breeds which make them great candidates for cheese plants.

There are several options available to those interested in milk testing. There is individual official testing, group testing and one-day testing. Each will give you official test results. If you cannot afford any of these then just keeping personnel records would certainly be better than not testing. The KGBA can furnish forms for your personnel use. There will be links with discussion on the official tests available in the following paragraphs. I thought you might be interested in reading this web page:

How to Get Started on DHI Milk Test with ADGA.
http://www.thegoatspot.net/forum/showthread.php?t=136415&referrerid The Kinder Association use the same rules for DHIR testing as ADGA so for a Kinder doe to earn her star she must meet the same requirements as that of an ADGA doe. Please view each of the videos in the link above whether you plan to do DHIR testing or not. Langston does such a wonderful job and offers so much for breeders.

You can decide on official testing, group testing or one-day testing to prove the milking ability of your herd. I think official milk testing has been explained fully in the link above.  If there are 3 or more breeders in your area that all wish to become testers then they can test each other's herds monthly OR you can each do the Owner/Sampler Test Option and run Verification Tests on each other's herds.  There are breeders, having a friend living near by to become an official tester, that friend can then come to test their herd. Testing can be done at shows too making it possible for several breeders to participate in a one-day testing.

I hear so much about record keeping programs. Milk testing is a great program for record keeping for your herd. Not only are you proving the milking ability of that doe but that buck and all those daughters and sons in the line.

One-Day Test is considered a separate event, which requires a separate sanction and registration fee. Contact KGBA regarding these fees. Points in One-Day Testing are earned by the quantity of milk produced, length of time since kidding and butterfat content. A Kinder doe must earn 18 points or more to earn a star in One-Day Testing. Below is the system used to calculate these points.

One point per pound of milk produced, calculated to within one decimal point.

One-tenth (0.1) point for every complete 10-day period that the doe has been in milk since her last kidding, with a maximum of three and six tenths (3.6) points or 360 days.

One point for every five one-hundredths (0.05) pounds of butterfat yielded.

Milk weighs about 8.4 lbs. per gallon. Below are the figures from a 2000 One-Day Test. Notice that only one doe receives enough points (18 or more) to make her star. The other does scores are good and ones that I am proud of. These are official scores and prove that these Kinder does are good milking does even if they did not make their stars. Ebony milked about 1-½ gallons in One-Day Testing with a total of 22.7 points thus making her star 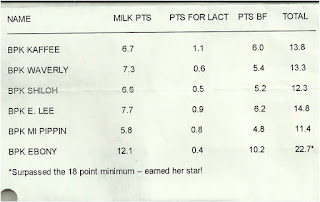 Milking testing is the only way to prove that your Kinder does are truly good milking Kinder.