*Animal ID Update: USDA plans to propose new rules*
A year ago, USDA announced that it was dropping its plans for the
National Animal Identification System (NAIS), and that it would instead
develop a new framework for tracking animals that move across state
lines. At the same time, the USDA also announced that it would form a
new "Secretary's Advisory Committee on Animal Health."
FARFA joined with a coalition of organizations to nominate a slate of
producers to the Committee. When the Committee was finally named late
last year, three of the coalition's nominees were selected: Judith
McGeary of FARFA, Gilles Stockton of the Western Organization of
Resource Councils, and Genell Pridgen of Carolina Farm Stewardship
Association. Judith McGeary was named Vice-Chair of the Committee, and
Dr. Don Hoenig (the State Vet of Maine) is the Chair.
The Committee, made up of a total of 20 people, met for the first time
on January 20-21, 2011. *At that meeting, the USDA officials stated that
a proposed rule has already been written and is going through the
administrative process prior to publication, which is expected to occur
in April. *Since the proposed rule is already written, changes at this
stage are not likely, but USDA asked that the
Committee identify any "show stoppers" with the framework.
The role of the Committee members is to represent "constituencies" of
people and organizations who are affected by USDA's animal health
programs. Below is a list of key concerns about the new framework that
we developed in cooperation with other organizations and submitted to
the full Committee for discussion.
The next public meeting of the Committee will be on March 4, by
conference call. It is open to the public, and information on how to
participate is posted on the Committee's website at:
http://www.aphis.usda.gov/animal_health/acah/
<http://mail.centex.net/Redirect/et.ratepoint.com/abae0b597f85d9d73b4e2a3e31d3b2ce/ce6b08c285e6760ca10a87cf554577ff>
The Committee website also includes all of the documents presented to
the Committee, and will have a transcript of the first meeting when
available. The core documents explaining the new proposed framework for
Animal ID are also posted on FARFA's website:
1. Summary of proposed requirements
<http://mail.centex.net/Redirect/et.ratepoint.com/3456587d6fa7c255e72e34bdd1e5682a/ce6b08c285e6760ca10a87cf554577ff>
2. Powerpoint report
<http://mail.centex.net/Redirect/et.ratepoint.com/1a4ce13341faa187990e79352bf3a534/ce6b08c285e6760ca10a87cf554577ff> to
the Committee
3. Tag
<http://mail.centex.net/Redirect/et.ratepoint.com/8d9b58f886d4b9ed4933fc13673b2afd/ce6b08c285e6760ca10a87cf554577ff>
information
*After the proposed rule is published, there will be a public comment
period. We will alert you to how you can access the proposed rule and
make comments as soon as that information in available. Please be ready
to speak up!
The USDA's decision to withdraw the NAIS plan shows that the grassroots
can be successful. We will need each of you to be involved to ensure
that any new regulations do not create unfair burdens for the hundreds
of thousands of small farmers, ranchers, and other animal owners across
the country.
*
Posted by Sue at 5:21 PM No comments:

The Beginnings of the Kinder Breed 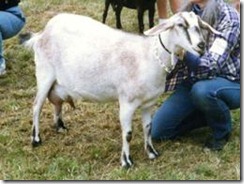 No photo of Zederkamm Cocoa available

HYPOCALCEMIA IN LATE-GESTATION (and lactating) DOES:
Feeding to Prevent it
By Sue Reith (2/07 update)

Hypocalcemia is a life-threatening condition that shows up when a doe is either pregnant or lactating, but getting fed an unbalanced diet that doesn’t provide her with enough calcium for both herself and her growing fetuses or for milk production.  It can appear at any time during the last 2 months of pregnancy, right up to the doe's due date, as well as at any time while she’s lactating.
Symptoms:  The first thing she'll do is refuse to eat her grain. Soon after that she won’t want her hay either.  Without quick intervention she’ll become weak and wobbly, lethargic and depressed. If still untreated by then, she’ll lie down and not want to get up. If you take her temperature when you first see these changes, it’ll be normal (102.3), but soon after that it’ll drop to sub-normal (below 102). Unless corrective measures are begun right away you’ll lose both the doe and her fetuses.
Treatment: If, because you're unsure as to why the doe is behaving this way, you call a veterinarian in for advice, he or she will probably (and unfortunately) tell you that her problem is “pregnancy toxemia”, or “pregnancy disease”, or perhaps the most likely diagnosis will be “ketosis” a secondary condition that happens when the doe stops eating (in this case because she's too weak to do so) thus has to start living on her own body's reserves*. While ketosis was not the initial cause of the doe's difficulty, after a couple of days  of being too weak to eat any food it will certainly become a major part of her problem! So it, too, must be dealt with fast!  A veterinarian, recognizing the ketosis but not the hypocalcemia that caused it, will want to treat with glucose, etc.  But it's absolutely essential that the doe be treated with calcium supplements** at the same time, without which she will either end up dead, babies and all, or with a c-section, with babies too young to survive, and a hefty vet bill as well.  So it behooves the owner to take charge of this whole process right away, to treat the doe with calcium supplements for the hypocalcemia, and, if more than a day or two has passed before treatment was begun, with glucose for ketosis as well.

To re-create the equivalent of a 30 cc CMPK dose (650 mg calcium; 500mg potassium; 150 mg phosphorus; and 96 mg magnesium) right in your kitchen, go to the Supplements department of any large chain-type drugstore and buy a bottle of Posture-D tablets (containing 600mg calcium, 266mg phosphorus, and 50mg magnesium), and bottles of Potassium tablets (500 or 550mg) and Magnesium tablets (150 or 250mg).  Calculate the amount of each pill needed to come up with an equivalent to one 30cc dose of CMPK as spelled out above, and, using a pill cutter of some kind, create that amount, crush it up to a powder and serve it orally in a little yogurt. Or add some water to the mixture and dose it in a drenching syringe.
***This delayed labor brought about by a lack of sufficient calcium to provide the uterus with proper muscle tone is also the cause of Floppy Kid Syndrome!  The babies remain in the birth canal for too long before gaining access to oxygen, a process which sets up an acidosis in the brain tissue.  This is why Sodium Bicarbonate is the treatment of choice to save the 'Floppy Kid”, which it does by neutralizing the acidosis in the kid's brain.
****If the pregnant doe is lactating and still being milked, you can serve that grain/pellets combo to her while in the stanchion
Sue Reith