In this neck of the woods the very first sign of spring is not crocuses, but daffodils. I am pleased to report that this past week I was able to pick daffodils on the south facing bank of a nearby road. So, spring is in the air!
With the advent of spring, we usually have a bunch of new arrivals on our farms, and while it is exciting and usually a joy filled time, we occasionally need to be right on top of things to preserve the lives of some of these little blessings that show up.
Because sheep and goats regularly have multiple births, all those legs can get a little tangled up, and we sometimes need to help the dam get those kids sorted out and delivered. If you have been involved with sheep or goats for any length of time, some of the info in this newsletter will seem like old hat to you. While that may be the case, from time to time going over someone else's prepper list for birthing supplies may remind you of something you have forgotten about, or give you an additional item to include in your own preparations.
Kids and lambs often have their lives hanging in the balance in the first hours after their birth. It is always best to have what you may need in advance than to find you have forgotten something and cannot get it until the weekend is over or risk having to call a vet out at 3am to supply something you could have had on hand if you had only thought of it during the week. Because there are so many little things to think about that might mean the difference between life and death, this newsletter is devoted to Birther Preps of the critter kind.
We hope you enjoy the information and do feel free to send in your tips and tricks for this time of the year. We can always benefit from other ideas!
Thank you!!!
All of Us at Hamby Dairy Supply


For Sheep and Goats

*Corn Oil and Turkey Baster- to help lubricate for a

large kid to come through you can flood the vagina

With our days getting longer and our pastures getting greener, many of us are looking forward to being able to put our goats out on grass. But with the fresh new leaves of spring come one of the biggest threats to our herds’ health – parasites.

During the winter, the parasite eggs in your pastures go dormant, and pose very little risk of infecting our goats, making it the ideal time to get parasite problems under control. Now is the time when you should be testing fecal samples and treating accordingly, or using a broad spectrum dewormer to eradicate the parasites currently in your goats. If you can begin the summer with a clean herd, you will end it with a clean pasture.

In a recent presentation, Dr. Donald Bliss, founder and owner of MidAmerica Ag Research, recommended the following procedure to eradicate parasites in your herd:

3. Retreat if necessary, using wormer specific to the worms your goats still have.

4. Continue this process until your samples are free of parasites.

Early spring (as soon as the grass starts to grow):

1. Treat your herd with Safeguard at the rate of 7.5 mg/kg spread over 3 days.

Timing is critical in this process. Parasite larva load is extremely high in the spring as dormant eggs begin to hatch, but by June, almost all these eggs have hatched and emerged. By treating aggressively at the beginning of the grazing season, you eradicate almost all existing larva from your pasture. If your goats are not dropping new eggs, the rate at which they become reinfested with parasites should decrease dramatically, and continue to decrease each year until they are virtually nonexistent in your herd. Just remember – if you can get your goats worm-free in winter and your pastures worm-free in spring, the rest of your year will be trouble free, too!

LIVER FLUKE
(an often-misidentified worm that's lethal if not treated for properly)
Update 12/08
by Sue Reith.

SYMPTOMS
Liver fluke damage is generally rather slow in appearing in mature goats... In a reasonably healthy goat, it can take years of gradual decline before the owner is even aware that Liver fluke is present.  Symptoms are some, if not always all, of the following: Gradual increase in unthriftiness (dry coat, guard hairs sticking up, ribbiness, pale eye membranes (indicating anemia caused by the worm's activity), a swelling under the jaw (that has erroneously been considered among the veterinary community to be symptomatic of resistance to treatment for Haemonchus contortus), and, eventually, a possibly sub-normal temp (less than 102 degrees), a distended belly (symptomatic of last-stage liver disease), and fecal pellets that are almost black in color and shriveled up with pointy ends on them.
Often the victim goat is one that has been wormed routinely, and yet still continues its gradual decline. The problem is that there's only one wormer on the market that will wipe out Liver fluke properly, Ivomec PLUS, (the PLUS part being clorsulon, specifically for eradication of Liver fluke) and many owners don't even know this wormer exists! Sadly, even when the owner finally learns about it and starts treatment, by that time there has often already been too much damage to the goat's liver for it to be saved even after proper worming.
BTW: While Liver fluke damage is often found in otherwise well-managed mature goats that despite good care continue to decline in appearance, in my experience this sudden appearance of anemia and weakness with either normal, or subnormal, temp (and sometimes swelling under the jaw as well) is not at all unusual to discover in young ruminants within the first few months of life as well.  At that age it commonly shows up when they're heavily exposed to it in pastures containing wet areas,  before their immune systems can get up and going to protect them. In fact, it's not uncommon for these young victims to die so fast they hardly have time to be sick.¹ This is especially true if there are any clostridial (Entero) organisms present in them, since they multiply and secrete their toxins fast in the already damaged, poorly oxygenated liver tissue .¹

TREATMENT:
I'm not one to quit without at least doing my best to save the goat... So if a goat of mine were affected with Liver Fluke I'd start it immediately on Ivomec Plus, using the appropriate worming approach as follows: All wormer packages note on the packaging that the product kills off ONLY the adult stages. So in order to get the worm load in the host down to a low enough level so that the immune system can take over and keep the problem under control, you need to worm 3X, with 10 days between wormings. The first dose will wipe out the adults already in there,  the second dose will wipe out the larvae that were in the gut, but not affected by the first worming, as they become adults (but before they can start laying eggs of their own), and the third dose kills off any eggs that were left over after you started the worming regimen,when they've passed thru the larval stage, when they, too, have become adults. 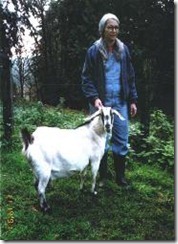