Greetings from the Gray J Ranch 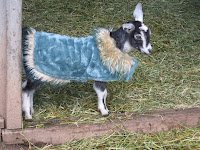 Many people have asked me how I got into Kinder Goats. The truth is, almost by accident and a long round about way. We had just moved from the city and wanted some goats as our property was covered with brush and poison oak. I saw an ad in the paper for Pygmies and bought a little buck and doe. Then I started reading all I could about goats. Whoops, ran the buck to the vet to get wethered and hoped he hadn't bred his little sister yet. They were darling and we named them Poco and Poca which means little in Spanish and also stands for for Poison Oak Control Officer and Poison Oak Control Assistant. No way could those two little Pygmies get much brush and poison oak under control.
We needed bigger goats to do the job and I read about all the dairy breeds and the Boer goat. The county ag extension office had their first Dairy goats and friends program which we attended and got a lot of great information on the different breeds and contacts for breeders. I got the address for the Pygmy goat club in our area and we joined. We showed in their first show and I was hooked as I had showed horses as a youngster. We went to the county fair and my husband stared into the eyes of a Nubian doe and instantly fell in love with the Nubians and I fell for the Boers. Some of my new Pygmy breeder friends also had Boers and Nubians so within 5 months of our getting into goats we had two Pygmies, two Nubian doelings, 1 Boer doeling and three bred percentage Boer does and only a small dog house connecting two 10 x 10 chain link kennels. 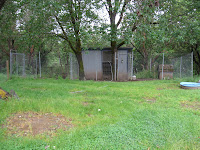 We decided that would never do come the rainy season and kidding time. There was a nice two stall barn down the hill from the house with a large horse corral near by but no other kind of fencing anywhere on the property and there were coyotes running around at night. We put up a six foot chain link paddock on the front of the barn that was 12 x 30 and field fenced the inside of the wooden corral. Then we fenced off the area between them to make a runway for the goats to go into the corral during the day and come into the barn area at night for safety. 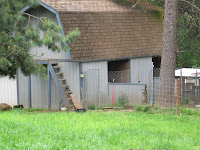 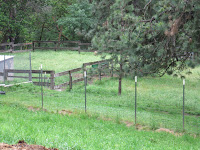 We had our perfect goat barn and paddock area or so we thought. The Boer herd over the next few years grew at one time to over 40 counting the new kids . We fenced more land and built more barns and areas for the bucks and the new kids. I spent most of the summer traveling to shows and helping put them on and making goat milk soap which my husband sold for me at three growers markets a week to support the goats. This was work not retirement.
I was sitting there the night before a big Boer show I was putting on. I was exhausted and frustrated over trying to finish up the show program when it dawned on me that my goats were not going to be competitive for the championships any more. A lot of the breeders were bringing in high priced new Texas stock to the area and I would have to do the same and spend many, many thousands of dollars to remain competitive.
My mind snapped. I told my husband I was selling out while still ahead and we were going to be done with the Boers. Just then the phone rang and it was a late entering Boer breeder who wanted to get his entries into the program. I mentioned to him that I had decided to sell out my Boers and would have them for sale at the show. He told me he would be there at the show cash in hand first thing in the morning. I had one old buck and doe who I didn't show any more so they stayed home. Well, word got around over night and when I pulled in and started unloading I was getting offers left and right. By the start of the show, I only owned one older percentage doe that I refused to sell and two young bucklings. It was a sad, lonely ride home and a very empty barnyard the next morning.
What to do about freshening my three Nubians? I didn't want to breed them to my old Boer buck and have percentages I would have to sell for meat. I jokingly mentioned to my Pygmy breeder girl friend that I should breed them to one of her Pygmy bucks and get little Pygnubians. She said that the cross was actually a breed called the Kinder and we researched it. She called Pat and asked her about the breed and getting started. I traded my friend my Boer buckling for a Pygmy buckling and she lent me a mature buck for the first breeding. I was in the Kinder business.
Jean
Next: Getting the important breeding business done. "Oh my gosh she is big"
Posted by Jean Jajan at 12:24 PM