Kinder Goat as a Meat Goat 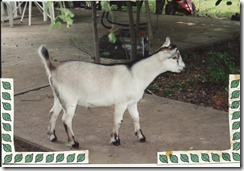 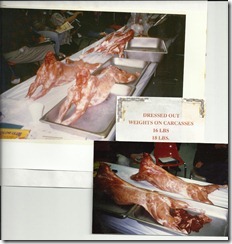 There has been much more written regarding the milking ability of the Kinder goat than that of its ability to produce a good meat carcass. The Kinder goat is a very good meat animal as well as a milking animal. This makes it a dual purpose goat just as it is advertised to be.

Kinder goats will breed every month of the year sometimes being referred to as, “aseasonal breeders”. The Kinder is also known for their multiple births so these two factors can provide lots of meat for the freezer or added income from the sale of the animals to the meat markets or both. Always remember that those Kinder does will at the same time be providing milk and milk products for the table.

Unfortunately there have been no official studies done on Kinder goats as a meat animal. There are only the statements of breeders as to quantity and quality of the Kinder meat carcass. Breeders report that on average a Kinder kid will weigh between four to five pounds in a triplet or greater birth. It is reported that their average weight of gain each month is from seven to nine pounds in the first eight months of life. This of course depends greatly on the type of care received.

A few years ago at Lincoln University’s, Carver Farm, in Jefferson City, MO at a Goat Day put on by the Missouri Goat Producers there was an evaluation and judging of different breed carcass and the Kinder goat was part of this program. The two Kinder goat carcasses pictured are the first place winners. These carcasses are from a triplet birth. The animals were five months old; one weighed 16 pounds and the other 18 pounds dressed out as shown. The other picture is the other goat of the triplet set shown on foot at five months of age.

As you can see the Kinder goat is truly a meat animal as well as a dairy animal. Best of both worlds!