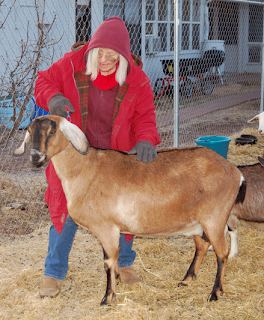 This is Tsu, my first goat. She is due to kid in March. She will be six in April. I got her when she was a kid, that's how I remember how long I've had goats. She wasn't bred until 2006, when she had two bucks in the dead of winter in the middle of the night. It was 15 degrees, and I didn't know what I was doing, Neither did she, it was horrible. Fortunately I have a neighbor who has experience and she helped us. The kids survived and did fine. The next year I didn't get her bred until very late, and her kids were born at the end of June. That was pretty bad too, there are just too many flies in the heat. I milked Tsu for 18 months, and dried her up to be bred this year. She is due to kid in late March. I will never breed for kidding in the cold or heat again, at least not on purpose.

She had two kinder does, Blacker and Browner. They looked so much alike that is how I told them apart until I got different colored collars on them. But part of the year Blacker looked Browner and Browner looked Blacker, they are really twins. Blacker went to live in Texas, where she is doing well. They still call her Blacker. This is the two of them when they were kids. 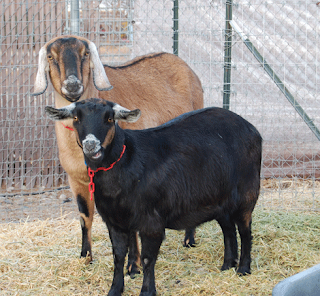 This is Tsu and Browner today. Browner is also bred to kid in March, they are both due on the same day. I'm not sure this was a great idea, but I came home from breeding Tsu and Browner was in season. I have to be sure to be there when they kid, so I can know for sure whose kid is whose. I don't think all the kids will look alike, but it's possible. 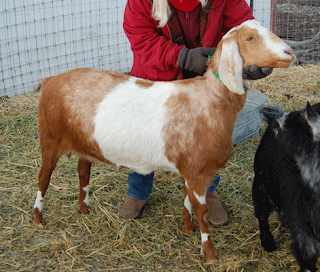 This is Piglet, I got her from my vet, she was his last nubian. She came with that name. He got rid of all his nubians in favor of Saanens and Oberhaslis. He has a big herd of dairy goats. She has the sweetest temperament of all my goats, and everyone loves her. In the summer her coat is bright red, and fades with white undercoat in the winter. I have a doe and a buck from her, and I will talk about them tomorrow.

Until tomorrow, have a wonderful day everyone!