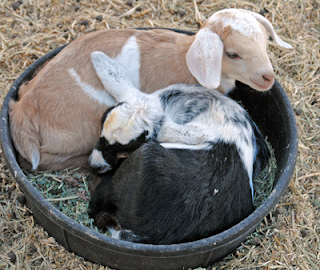 Fresca and Domino snuggling at less than a week old. Domino got iodine on his head, that's what the yellow is. Nowadays yellow on his head is pee. He was an adorable kid and everyone loved him. Even all the other goats. Fresca is still very tightly bonded to her mother, they hang out together all the time. 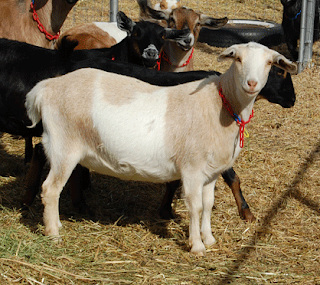 This is Fresca today, she is bred to kid in March. She will be two in June. She was bred to Ray, who is one of Triscuit's kids. Tomorrow is going to feature Triscuit and her kids. 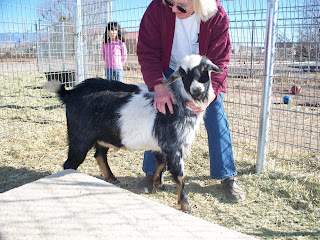 This is Domino as an adolescent, when he was still charming and pristine. 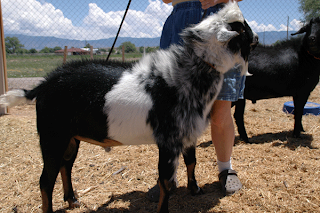 This is Domino last summer, he is bulkier now, and tinged with yellow. We tried to get a current picture of him, but the best we got wasn't good enough. He bugs Ray alot, I think about separating them, but they would have to split the room they have and it wouldn't be very big. Plus they also snuggle, so I don't know what is best. Advice would be welcome.

Ray is bigger and used to be the dominant one. Then we had a big rainstorm, and they spend a day and a half in their house. When they came out Domino was dominant and Ray had a little tear on his ear. (That healed with no problem)

Piglet's feet aren't very good, her hooves grow very fast and she has had a problem with laminitis that started after she kidded with these two, I have watched her kids very carefully and so far their feet are fine, and they have had no issues, but she was older when it started. We successfully treated her last year, and she was running and jumping and appeared cured, so I gradually stopped the meds I was giving her. She has relapsed, so we have started over. This time I know it isn't because her hooves haven't been trimmed well enough. So I am not inclined to breed her again, at this point. She is a terrific Aunty with everyone else's kids, and they love her.

Tomorrow is for Triscuit.

It is snowing here! Well, it has sort of turned to rain. But they said there would only be snow over 6000 feet, and we are around 4800 feet. So the snow was a surprise. We have gotten more precipitation this year than we usually get, hope it keeps up.

Have a wonderful day!