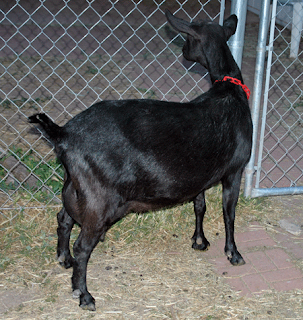 And her kids. Triscuit (and Madame) came from Sue Huston when I went to Missouri in 2007. She is a 4th generation kinder. She has had five kids so far, and I still have them all. She has a lovely udder, and this picture hints at it. Triscuit is very friendly and a little bossy. She runs to the milking stand to get milked, she really wants her grain. She is second in line in the herd order, and has contested that a bit with my big nubian Tsu, but they settle. She is half the size and younger too, I don't think she's going to win that contest anytime soon. 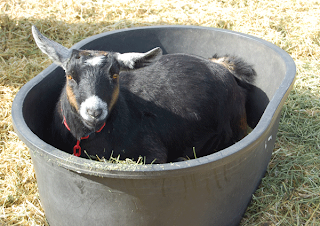 She had two kids in 2008, PipPip and HooRay! Here is Pip in a tub. Pip is due to kid in March, I am hoping for a lovely udder like Triscuit has and teats that are a bit bigger because Tsu is her grandmother. Pip is smaller than any of my other kinders, but she weighs about the same amount as Browner. 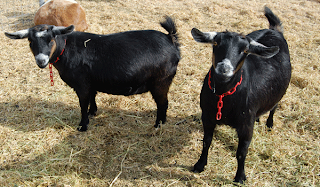 This picture of Pip and Browner shows the size difference, Browner is taller and longer. They both weighed 80-85 pounds before they were bred. Pip is the shyest of my kinders, and sort of a loner. I'm hoping she will have a doe that will stay with her and that she will be happier. I'm probably imagining things, but I would like to see her kid snuggling with her. 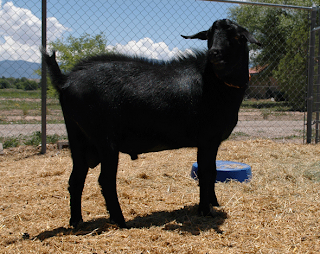 This is Ray, he is the biggest kinder I have. I'm pretty sure he is over the size standard, but but he has a nice long body. This year I will get a better look at how his kids are going to turn out. I don't have any of the kids he sired last year. 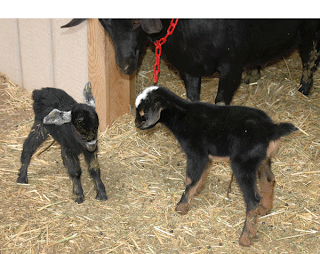 In 2009 Triscuit had triplets, the first picture is Trude and Simon, a couple hours old. They are out of Domino. The second picture is Pickles. She and Trude will be bred this fall, Simon is destined for the freezer. Last year I learned how to socialize kids, and all the kids from 2009 are friendly and can be handled pretty well, even though they were not bottle fed. 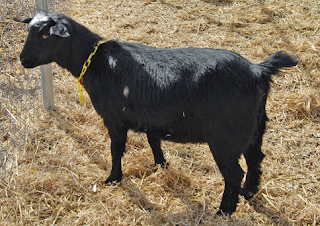 I'm having some trouble getting these posts to format the way I'd like, so please forgive me the strange layout.

Have a wonderful day!
Posted by Jan Hodges at 9:34 AM