I made Blue cheese. A long time ago. Blue cheese is easy to make and quite complicated to age. And it takes a long time. My first effort isn't very good, it is really mild, not the right texture (more like chevre), and has no veins of blue in it. It doesn't taste bad, it tastes like a very mild blue.

I learned a lot. The biggest thing I learned is that if you do this you are likely to get blue mold loose in your cave. I think it might be real hard to avoid this. I knew this might happen, and I tried very hard to be careful. I kept it in containers I got specifically for this, and the cheese was never exposed to the cave. But you have to turn it over a lot, and you have to handle it. I think mold got on the lid from taking it on and off. I understand that once you have blue mold in your cave it might be impossible to get rid of it. So it might be a good idea to avoid this cheese for awhile, or at least be really paranoid.

So I had a little chunk of cheddar aging in there, and it didn't have a tight enough seal. It got blue mold. It was about 5 weeks in the cave before I noticed the blue mold. This was a complete accident. I was curious, so I left it alone until it was about three months old. It was an amazing cheese, naturally. It had the flavor of cheddar, plus strong blue, plus a bit of bite at the end, it was really great. It had a nice texture too. I wished it had a bit more salt in it. It's long gone of course. 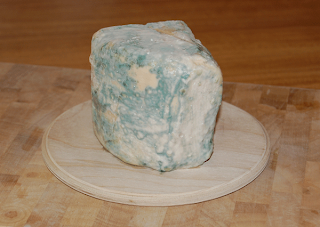 I've been trying since to replicate it, and the picture is my first attempt. It gets scraped off every so often, this is before that. I think it's kind of pretty. But I love blue cheese. I've got several others working on this in the cave right now, but this is the only one I've tasted. It's not up to that original accidental little piece, at least not yet. I think I'm going to be trying to do this forever. If it could be consistent I think I really would try to find someone to make it commercially. Not me. There are quite a few people making goat cheese commercially in New Mexico.

Unless you really want to experiment and play, and are willing to do the work and take the time (years), and love the flavor of blue cheese, I recommend staying away from blue mold. And if you are all of those things, you may need two caves.

This is going to be my last post, the month is about over. I have really enjoyed doing the blog, I hope reading it hasn't been too big an ordeal. It was a lot of fun, and I highly recommend it for any of you that haven't signed up to do it yet. I'm going to miss doing it. But I'm also looking forward very much to hearing from the rest of you!

Have a wonderful weekend, and a terrific year! I hope everyone's kiddings are perfect. Mine don't start until the last third of March.
Posted by Jan Hodges at 10:41 AM